We have had some fantastic work going on in our tiling centre over the last few weeks and it hasn't stopped today, as Javier has put his art skills to the test along with his new tiling skills.

Javier seems to have been at Able Skills for ages, he firstly completed eight weeks of plastering training and then he is now edging towards the end of his six week tiling course. He has picked up some great skills and is now all set to start a new career within the construction industry.

Previously, Javier was an artist and was generally a very creative person. However, he was looking for some stable income and he saw this within the construction industry so he decided to get trained up in plastering and tiling.

But of course, he was never going to forget his art skills and he has used them to his advantage during his tiling course and has completed two great football mosaics. He is now going to start offering this work for people that are interested, although he plans to get some more practice first.

Here are his two football badges: 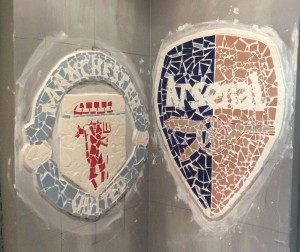 Javier's football mosaic, probably could have done with the right colours though!

This follows up very nicely to some great work that has been completed in our tiling centre over the past few weeks, including Shen who completed a mosaic Able Skills logo last week.

Our tiling centre has been extremely busy and Javier has been one of many students that has achieved so much in the time they have been here. Looking back to five weeks ago, Javier had never laid a tile in his life, but now he is challenging himself by combining his art skills and his new tiling skills to complete very detailed mosaics.

If you are interested in completing a tiling course and testing your skills, then why not contact us today on 01322 280202 and we will be able to give you all the information you need. We are also open all Bank Holiday weekend, so come down and look around our centre!